If You Took A Holiday - Thursday 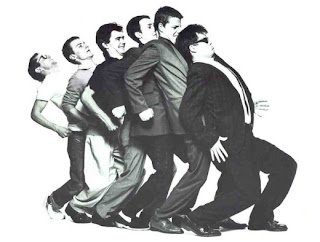 It starts in the arrivals hall as I wonder if the tingling in my legs is cramp or a deep vein thrombosis? The knee-length flight socks that made me look like a nightmare version of a St Trinians’ schoolgirl might not have been worth the indignity.

‘Don’t suppose we’ll see our luggage again.’ I grumble as the baggage conveyor does the same and starts up, shunting several fat woman sideways who had sat down after the exertion of moving a hundred yards without priority boarding and a wheelchair.

‘Don’t go all negative on me.’ Chides my wife as a battered suitcase with one lock hanging off chugs round and round in a poignant search for its owner. I was never that upbeat. Who is after a childhood parental divorce and the first house move you didn’t want or need? But half a lifetime later and several thousand fraught moves on, while others take the equity and the plaudits, I’m a tad grumpy.

‘They know a property person when they spot one.’ Chuckles my wife, as suitcases recovered, we trundle through the airport and several shifty-looking Spaniards thrust up-market homes brochures at us while overhead advertising screens push new developments with waterside views and silly prices. Nothing changes.

‘Is it really three decades since we were here?’ I ask incredulously as the sun catches my face and I feel instantly better and the asking prices in my hand not so laughable. The island looked more built-up as the 737 circled the airport and it’s a fair bet I won’t be insane enough to dance to One Step Beyond by Madness this time, but the clubs are still thriving. The dream is tarnished when you see them in the daytime, but then the property market is just as disingenuous.

‘Bloody hell.’ I stage whisper to my wife as we board the coach. ‘Is this a hearse or are we booked into sheltered accommodation?’  A sea of sun-damaged faces, rheumy eyes and inappropriate sportswear look back at me inquisitively. It’s the first time I’ve felt young since that McCarthy & Stone launch evening.

‘At least I won’t have to talk to people.’ I hypothesise as we take the first walk round the resort, having asked to change the room when the sea view turned out to be another property Misdecription, only without the criminal prosecution and taped interview.

‘Why’s that?’ She asks warily.
‘Because they are all Germans.’ I tell her as a Teutonic couple march by and greet us with a, Guten Tag.
‘Look,’ I tell her as we approach the quayside shops. ‘Even the estate agencies are run by Krauts.’ And we pause by a row of shiny-windowed units with names like Engel & Humberdink and Voelkes & Himmler. They may not have hung on to Poland but they got most of the Mediterranean eventually.

‘Where there’s overpriced homes you’ll get big ticket boats.’ I tell my wife knowingly as we see equally flashy yacht brokerages cheek by jowl with the property purveyors. I’ve ex-vendors who bought in haste in Spain, sitting on 50% price falls still unable to return to the UK, yet here are row upon row of boats, all for sale just as the apartments are, just as everything is.

‘They’re having a laugh surely?’ I ask my wife as, sat at a waterside bar, we get the bill for a small beer and a diet coke costing more than a couple of NHS prescriptions. All around the tinkle of well-bred voices are, curiously, speaking heavily accented English across borders. Within view are more Sunseekers than a wet bank holiday in Hove and I just long to put the dampers on the whole fantasy by pricking the price bubble, but self-harm isn’t an admirable trait. I gently broil instead.

‘How many million Euros?’ I scoff, as I can’t help myself passing another agency window, pausing to look. The infinity pool looks enticing, as does the sun-kissed view, but come Christmas and the realisation that some Spanish planner took a backhander and you don’t own the parking or the plumbing, it might not seem so bright. I reckon David Blaine would be embarrassed by all this clumsy slight of hand.

Hey you, don't watch that! Watch this!

I danced to madness at the end of a chelsea game last year - the squadron never dies!

Enjoying the book, keep it up!