All Too Typical - Monday 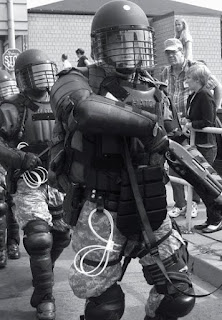 ‘I’d rather you go in first.’ Says lettings lush B as she pauses on the doorstep of the flat with the dodgy tenants. She’s given the requisite notice to inspect but as they haven’t paid rent for three months and the chavvy woman in the flat opposite - who is still watching us - has told us they are long gone, I’m not expecting a welcome.

‘Cautiously, I move forward, heart pumping audibly in my chest. I’ve had a few punches thrown at me, and several pieces of office furniture, but usually there’s a bailiff when we’re taking possession of properties. Obviously it looks better for the company if male members of staff get assaulted, and they only pay for rape alarms for the women, but I feel pretty vulnerable.

‘God knows what you’ll find in there.’ Says the fat neighbour with a hint of glee. Her mewling baby is demanding a feed and the dead-eyed toddler is tugging at her tracksuit bottoms for attention, but she’s too busy watching the show to take any notice. No sign of either of the Dads.

‘Ugh, what’s that smell? Asks B throatily. A stench of something decaying has almost physically assaulted us as I swing the door open to reveal a dank hallway full with black plastic bin bags. A big bluebottle zigzags towards the light and not for the first time I wish I’d paid more attention at school.

‘I’ve had to call the police, the social and environmental half a dozen time.’ Moans the woman as I think uncharitably, they’ve probably got your number too love. ‘You lot shouldn’t let scum like that rent in here.’ Continues supermum as the toddler starts to whine about missing a Peppa Pig episode. There’s a sty here you can wallow in kid.

‘Who’s going to clear up all the mess?’ Persists the woman as the baby paws at her ample breasts and my stomach churns unpleasantly. I’m just waiting for her to ask about compensation but B shoves me inside the hall and pulls the door shut. ‘Fat slapper.’ She spits ungraciously. B’s never been called fat as far as I’m aware but a pot, kettle, black line runs through my head until I see the kitchen and much darker cooking utensils.

‘Oh terrific.’ Moans B surveying the detritus. The hob has several months’ worth of spillages baked onto the enamel and the work-surfaces are covered in unwashed crockery and saucepans. By one of the gas rings I can see the remains of home made baking of some description. I’m no expert, but a tarnished spoon, some tin foil and half a dozen spent matches doesn’t look like they’ve been cooking cupcakes.
‘Junkies. I knew it.’ Says B gloomily. ‘Who the hell are we going to get to clear this mess up? The Polish guys have gone home and nobody local will touch this place for sensible money.’ She has a point. The flat needs stripping, disinfecting and redecorating before any new tenants can be shown round. I have a feeling group legal will be getting involved.

‘This is what you get if you give low-life’s free accommodation and drug money.’ Rails B in a Daily Mail moment.’ God, she’s got it worse than me. From bitter experience I look to the fridge. Yep. It’s been unplugged.

‘Watch where you tread, there might be needles again’ I advise B, as I decide not to open the grubby Electrolux door. The maggots will wait. I’m just here to make sure B isn’t assaulted, other than her nostrils.

‘God.’ Groans B looking into the bathroom in disgust. ‘The water must be off. The toilet bowl looks like that rainy festival when I had to have a dump in the chemical loo. There were things in there nobody should be excreting.

No need to rent, buy the book instead here:

Is this why councils love paying local housing allowance instead of owning council houses? Privatise the mess!

If this is as grim as it sounds (great detail by the way) I do not envy your job as of now. I feel sympathy, no one should be subjected to that.

yet another argument for slashing HB as it only goes to rentiers, it does nothing for the economy except increase our national debt (don't start me on the annual deficit)