Are We There Yet - Sunday 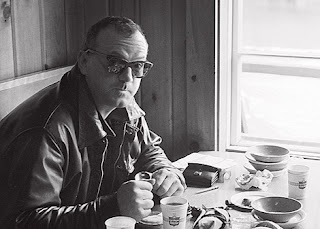 ‘Seriously, a Little Chef?’ I ask, as I reluctantly indicate and look to move across the traffic.
‘You haven’t had two children.’ Bats back my wife. I’m tempted to pick her up on the semantics of the statement but she trumps me by adding. ‘My bladder isn’t what it was.’

I’m not allowed to put the company car through an auto-wash any longer, so I’m guessing piss-stains on seats have to be manually rinsed too. It’s the reason I don’t like taking pensioners to view retirement flats in my motor. I park as quickly as you can without a handbrake turn.

‘God, look at the paintwork.’ I tell my wife as she moves as quickly as she’s done since the school hurdles race she always tells me about. She doesn’t seem to be interested in rotting woodwork and my comment about dilapidations at the end of the lease term, so I grab the door she’s just entered before it bangs in my face. It’s a step back in time.

‘Table for one?’ Asks the spotty girl with an assistant manager badge pinned to her breast. Great. I look like the sort of saddo loner who dines here regularly I think, as I correct her. She looks towards the car park suspiciously then ushers me to a table in the corner, close to the grill station where a brace of bored-looking lads are scraping disinterestedly at an unseen spillage on the hotplate. It could be the early seventies and I could be with my father on an access day out, neither of which I want reminding of.

‘She thought I was on my own.’ I tell my wife when she joins me after a lengthy wait, as I perused the menu and wondered what, other than the prices, had changed in the last thirty years?
‘The loos are a bit tired.’ Warns my wife, as I tell her what I’m having, leaving the knickerbocker glory option until after the defrosted burger has arrived. You have to take your time strolling down memory lane.

‘I have something in common with this place.’ I tell her as I rise to visit the toilets. She looks quizzically as I repeat the a bit tired line and the assistant manager – shouldn’t that be manageress? – moves towards our table.

As I bowl through the door, noticing more peeling paintwork, but a proudly displayed hygiene award certificate in a tarnished frame, a man in too short trousers and a bright jumper is tugging on the wall mounted vending machine urgently.
He looks up startled, face going as crimson as his sweater, then hurries out without washing his hands.

Business done, I stand at the basin and try to work out which product he wouldn’t buy from the chemist, the red-faced man just purchased. A toss-up between the toothpaste and brush kit, for those with bad breath and no girlfriend and the vibrating penis ring for those with…

‘This pace is full of weirdos.’ I tell my wife between mouthfuls of rubbery beef and greasy fries. She glances round the few occupied tables, as she nibbles on a Fillet-of-something decidedly fishy. The other customers are the sort of slack-jawed oddballs who normally flunk credit scores in the letting department, or ask about DSS tenancies. Is that why we’re here? Not a warped nostalgia, but a grim insight into the future of a failed salesperson?

‘Are you a regular customers?’ Quizzes the girl when I ask for the bill and she points to the till by the door. Not yet, I want to tell her, as I see the aforementioned knickerbocker glory being served to a fat woman with an unsettling look of lust and gluttony etched on her face.

‘That was really delicious.’ Announces the elderly couple ahead of me at the till with no hint of irony. Perhaps it’s me, I think, as I pay for the meals while my wife goes to the toilet again. Maybe I’ve turned into the sort of grumbling curmudgeon I detest dealing with when they have to downsize the family home for a sheltered apartment with not much more surface area than their next stop - just without the brass handles.

Stop off for the e-book, cheaper than a coffee.