Back To Life Back To Reality - Tuesday 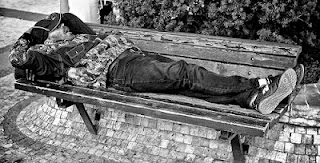 Walking across the park nothing much has changed. The detritus of last night’s takeaway meals look broadly the same. A scattering of branded boxes, some fox-stripped chicken bones and a selection of high-strength lager cans are strewn amongst the meagre flowerbeds. A lone council employee is over the far side in his dayglow jacket, poking disconsolately at the debris with one of those long-handled pickers that give the illusion you’re at arms length from a rubbish job.

‘Spare some cash for a cuppa?’ Pleads a scarecrow-like figure slumped on one of the benches, in a vast army greatcoat glistening with dew. The unshaven man has that look of despair in his eyes, the look I tend to wear on a Friday afternoon when the weekly stats are due and I’m still trying to piece together a deal that might save me from transmitting negative figures.
‘Sorry. No change.’ I tell the unshaven man curtly. It’s not exactly true in relation to the pound coins in my pocket but I’m guessing it’s spot-on when I get back to the office. The man mutters something unflattering behind my back and I only just restrain myself from spinning and giving him the Daily Mail readers’ rant about getting a job and taking some responsibility for a being washed-up failure, but I realise it’s too close to home.

‘Hello.’ Calls a familiar voice I don’t want to hear. ‘Been somewhere hot?’ I paste on my public persona smile and turn to see the hobbling banker. He looks like shit.
‘Holiday.’ I tell him with a thin smile. I can feel my skin starting to flake and I’m guessing the tan will be gone before the credit card bill arrives and I wonder just what I bought from an unknown shop, with such a poor exchange rate.
‘Alright for some.’ Rejoins the loan peddler. ‘I can’t afford to get away.’
Neither can I mate, particularly with a mortgage from your pension-plumped bosses, I think sourly. That’s why I’m heading back to the office hoping against hope they’ve had a decent few days while I’ve been away.

‘Somewhere nice?’ Enquires the banker, pleasingly struggling to keep up with my slightly brisker now, pace. Just another flyblown island where they’ve over-borrowed and overspend on property projects I feel like saying, but I just give him the destination instead.
‘Get a good exchange rate?’ He asks as we cross the road together and I see the office fascia looming ominously. Not for the pottery pieces my wife insisted on buying which were in pieces when we opened the suitcase. I give a neutral answer. You never know when you might need a loan, or another holiday - this time a payment one.

Nobody is in the office yet, as expected. I scan the window display looking hopefully for a batch of new, realistically priced, sole agencies and maybe a couple of freshly appended sold stc stickers. It looks exactly the same. Even the dead wasp is still slowly desiccating on the windowsill on top of those glossy corporate brochures extolling our group virtues. Brochures that no potential seller reads when all they want is a high price and a cheap fee. As office manager you like to think you’re the best salesman, so paradoxically and against my financial benefit, I’m almost glad they haven’t done too well in my absence, but then again... Sighing, I stoop to unlock the door. The alarm starts to sound as I wonder if they’d miss me if that dream of becoming a writer - or more likely the lottery numbers coming up - ever came to pass? Probably not. I’ve seen colleagues exit for varied reasons: greener grass, mewling maternity and nervous breakdowns. You’re quickly replaced.

Codes punched in, I notice a light bulb out in the window display and growl in disapproval. And yes, I spotted the weeds growing outside the office hadn’t been tugged up. Firing up my terminal I find my password no longer works. About the only thing that has happened judging by the manual copy of the stats I peruse instead.

And another piece of me dies inside.

Still alive and kicking the e-book

Just in time for the Olympics. I can feel the gestation of a new post already. ;=) Welcome back to:

This royal throne of accountants, his septic bile,
This earth of travesty, this seat of mini cars,
This other meeting, semi detacheds,
This fortress built by Connells for herself
Against all common sense and the hand of reason,
This miserable breed of men, this little insular world,
This depressing office set in the high street,
Which serves it in the office of a wall
Or as a moat defensive to a house,
Against the envy of less fortunate house buyers,
This messed up plot, this earth, this realm, this England...