That's Just The Way It Is - Friday 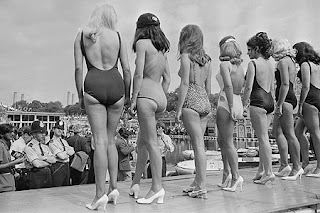 Pull up outside a late valuation. The house looks desirable enough and a quick check on my sales records and a mental fee calculation chases away the lingering irritation caused by having to work when most people are postprandial or pissed.

I double-check my briefcase contents as I’m five minutes early. Agency contracts, company promotional material, comparable homes sold recently, digital camera, old-fashioned tape measure, fat financer M’s business card, Dictaphone and valuation form - all in place. Preparation is the key to a good presentation, that and good listening skills, the ability to think on your feet and knowing when to close.

‘Good evening.’ I begin trying to subliminally emphasise I’m putting myself out and ratchet-up the pressure to commit. The man, early forties and self-important squints at my card dismissively, ignores my qualifications, and swiftly beckons me in like some tradesman who has turned up at the front door by mistake.

As I follow him to the sitting room I can’t help notice the aroma of supper lingering in the air. I’m guessing something with tomato and pasta and my stomach rumbles in fruitless anticipation. I’m trying not to let my annoyance show as he pauses, neglects to turn off the blaring television and tells me I have fifteen minutes.

Apparently he was too busy to see agents during the day, hence the evening appointment. I accepted it because new instructions are our lifeblood and it’s a competitive business. Now it seems he had time to eat bolognaise and garlic bread before this twilight beauty parade. And now he picks up a clipboard. A bloody clipboard that undoubtedly has a list of questions that are as inane as, do you like children and charity work?

Swift tour of the house and a peek at the gardens later and he’s conspicuously looking at his watch and looking towards the front gate. He has another agent coming, I belatedly realise. I was hoping to close the business, majoring on realistic pricing, good service and the fact I’m suffering from mild malnutrition, to pitch for his so-so semi.

He hurries me through my presentation as I wonder when he’s going to ask the probing, salient questions he’s taken time to list over a lazy supper.
‘So how much can we ask and what’s your lowest fee?’ He demands curtly.
‘Of course they’re both important,’ I begin trying a little avoidance tactic. ‘But I want to make sure you’re happy with the service you’ll get from your agent. It’s not just about a picture in the office and an advert. In particular we pride ourselves on the after sales progressing. That’s when a good agent can make a difference.’

He looks at me slightly bemused and a hint of a belch escapes from his mouth before he sneers. ‘You would say that wouldn’t you? At the end of the day you are all the same. Just different ties.’

As I say my goodbyes with as much dignity as I can muster and make one more plea for consideration I catch a glimpse of the top-secret clipboard notes. Five agents company names, then a space for price and fee. That’s it. Nothing else. No experience, no qualifications, no probing for local knowledge, understanding of the conveyancing process and its pitfalls. He might as well be wearing blinkers and a nosebag.

‘You just been in there?’ Questions an estuary English voice as I ease myself painfully into the car and my tummy rumbles like an incipient volcano. I look up to see a rival agent, lower-to-mid market, wide grin tie and boy.

‘Possibly.’ I reply, knowing if he was any good he’d have been outside early, casing the joint.
‘Saw you coming out.’ Confirms the smart-arse before making some lame joke about me delivering pizzas, which only serves to heighten my hunger and sharpen my anger. He’ll undercut my fee and probably pump the price unrealistically high if he can get a board and an instruction for his target figure. He’ll want a sixteen-week sole agency to close out any more professional operators and work on bringing the price down.

Judging by the service-indifferent man inside he’ll fall for it. Generally, people get the agent they deserve. I just hope he gets indigestion.

The trouble with paying more for a better service is that you do not know who will offer the best service until it is too late. Secondly everyone is going to say they offer the best service. I once had a letter through the door from an agent detailing the sales and completions stats of the local competition, was very informative, they/you should do this more. In my very limited experience I have found them to be either better at sales or completion, just not good at both! When the gap is anything from 1% to 2% it makes a massive differnce on a few hundered grand, so you can see why people stick the only tangible thing they know!

Anon - that's the nub of the problem when selling a service (and a future service) not a product. Personally I'd be happy if agents had to be qualified and licenced. There would be fewer rogues and some enforceable standards - don't hold your breath though...
S.A.

Talking of service - as a potential buyer I went to a viewing done by the owners, and made an offer by phone when the agent phoned the following day. At about 10% below asking, my offer was rejected with the "require close to asking price" line (granted, the property has only been on the market for a few weeks). I'm kind-of left feeling that I ought to have had more contact with the agent, having not met them face to face, nor even made the offer in writing. Although I appreciate the vendor is holding out for now, can I be sure that the agent realises that my interest is serious? (I realise now I may have come across as more credible if *I'd* initiated the phone call in which the offer was given.) I'm an FTB in a very strong position, and the vendor hopes to sell fairly quickly...