Eat To The Beat - Wednesday 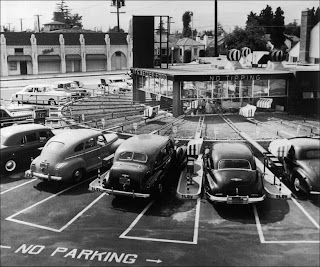 If there’s been a more pernicious over-the-pond import than the breakfast meeting, I can’t think of it on an empty stomach.

My wife’s peck-on-the cheek farewell and admonishment combo, consisted of an instruction to “not be grumpy”, as I pulled away from home, unpleasant gurgling noises emanating from under my shirt where metabolism shocked into un-fuelled motion, was already signalling disapproval.

She thinks I’m a glass half-empty kind of guy after several decades flogging homes for ungrateful buyers and sellers. She’s a good third of a liquidy container out on her maths - and what’s left is evaporating pretty fast.

‘You might enjoy it.’ She’d added seemingly with no intent to antagonise but with exactly that result.
‘Enjoy?’ I’d mocked.
‘You’ll get fed.’
‘They give breakfast to a condemned man before they fry him.’ I’d snarled back. ‘And he doesn’t have to sit through a sodding PowerPoint presentation before they throw the switch.’

‘What time of day do they call this?’ Chuckles my rival manager H as he climbs out of his two grades higher than mine, motor. The little twerp could actually qualify as one of Snow White’s helpers, although with his track record towards female workmates he’d probably be sleazy, rather than sneezy.

‘I’m not even sure I’m hungry any more.’ I tell him as I notice he’s wearing those shoes with the lifts in the soles. The one’s he thinks nobody knows about. The one’s I’d be mocking on my Facebook account if I had any friends – and an account.

‘That’ll be fear.’ He suggests as we move towards the bland budget hotel foyer and I make a mental note to remember I’ll need an exit token for the barrier when I finally escape this hellhole.

‘Fear of what?’ I bite back. ‘Indigestion?’
‘No, the monthly sales figures.’ He crows, as I ponder lumping him and just driving off, until I remember the token – and the mortgage.
‘We’re doing okay.’ I offer lamely knowing his office will be higher up the chart than we’ll ever be.
‘Mid-table mediocrity.’ Mocks the poison dwarf as I fume impotently and wonder if it’s too late to take up smoking. Rebel without a cause.

‘No cooked breakfast?’ Asks fat mortgage man M as we gather round a large oval table, managers and financial consultants in another uneasy alliance of shared needs and mutual dislike. There’s a pile of limp-looking, rapidly cooling, bacon sandwiches in the centre of the table and several cheap looking plastic thermal jugs of coffee. An overhead projector with the bean counter’s laptop connected squats menacingly to one side, as I curse Bill Gates for the hundredth time.

‘I thought we’d pass on the full English,’ announces the figure-fiddler as a way of opening. ‘Eat as we work and get straight on to the numbers.’ I feel sick and I’ve only sucked on a dusty Mint Imperial so far.

‘Cost cutting.’ Whispers H from somewhere down by my elbow. Not sure what made him think I’d like him sitting next to me. Perhaps he just wants to feel big about himself?

‘No vegetarian option?’ Queries one of the female managers, picking at the curling pig-butties, to barely concealed derision from the meat eaters.
‘I’ll eat your bacon if you like?’ Suggests M to guffaws all round. Then the numbers hit the screen.

‘Could you just open the barrier for me? I plead into the microphone as three cars behind start sounding their horns and I’m asked for proof of purchase.

I hunger for something better.

No S at the meeting? My silexdyc eyes misread thermal jugs first of all.