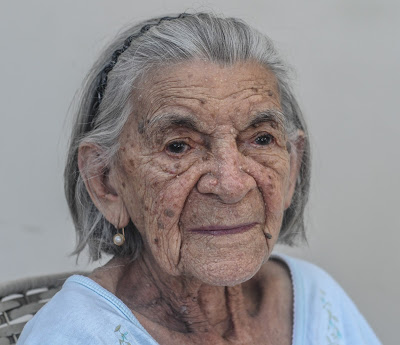 ‘Who’s that wizened old crone staring in the window?’ I hiss to negotiator, S as I try not to make eye contact with the elderly lady staring past the property pictures.

S look up from her screen surreptitiously, as I walk obliquely across the office racking my brain for recognition. The woman looks familiar, but then I see an awful lot of faces and to be honest I tend to remember the brick elevations more readily than the flesh and blood ones - particularly if the wearer has more sun damage than the pyramids and is about as ancient.

‘Isn’t that Mrs….’ Falters S. She’s struggling and she’s brilliant with names. I can barely remember my own some days.
‘Could you give me a clue?’ I whisper desperately, as I see the woman peering even more avidly through the glass. She’s going to come in. I know she is.

‘Oh you know….’ Continues S
I don’t.
‘The couple from Waterside Gardens who moved to Spain a few years ago.’
‘The Greens?’ I ask hurriedly, as the woman outside moves hesitantly towards the door.
‘Close.’
‘Browns?’
‘Almost.’ Teases S.
‘For f•••s sake tell me.’ I growl as the mottled hand reaches for the door. The swear box is going to take another hit, but it’s worth it.
‘Black.’ Says S softly. ‘Mr and Mrs Black.’

The old lady comes in slowly. She looks like I do every quarterly award’s ceremony when that little shit H, my vertically-challenged rival branch manager, gets up on stage and waves the performance cup in my direction. Beaten.

‘Mrs Black.’ I exclaim effusively, moving over hand outstretched. ‘How lovely to see you.’
It’s not. I sold her house in Waterside Gardens against my better judgement. I wanted the commission but knew - like many - she’d tire of sunshine and sangria after a few months and want to buy her old home back for the same money she sold it for. Just rent it and get the folly out of your system old people. At least you’d have a fall back position when you become ill and realise the much-maligned NHS does have some merits - and a few more people with English as a first language. A few…

‘I wasn’t sure you’d recognise me.’ Says the old duck, falteringly.
‘Of course, I did.’ I lie, sensing S’s disapproval but not daring to catch her eye.
I’m hoping against hope Mrs Black is on a brief visit and not wanting to wind back the clock. They lose tens of thousand on ill-researched Spanish properties with dodgy drains and title, then can’t understand why the UK’s under-supplied market has moved on.

‘Mr Black not joining us today?’ I enquire jauntily and as soon as I say it, I regret it.
The old woman’s face crumbles. Shit he’s dead, I think, mind racing. Still, at least he doesn’t have to hear their old home would cost £75,000 more now. And that his widow could never afford it.

‘That was awkward wasn’t it?’ I say to S, after I’ve resorted to the communal box of tissues kept for when sales fall-through, and done my best Samaritans’ counselling session with poor old Mrs Black, before ushering her out the door.
Seems the locals didn’t speak much English, the rats were as big as cats and the plumbing wasn’t all they were used to. Oh, and of course Mr Black inconveniently died.

‘Will she be able to afford to buy here again?’ Asks S concernedly.
‘Half the size for more money.’ I predict glumly. ‘And that’s if she can ever shift a damp Costa Del Sol town house with crippling service charges and a pongy pool.’

‘Why do they do it?’ Muses S as I pass her a mug of tea I’ve made. I’m nothing if not democratic - except when it comes to leaflet drops on rainy days.
‘Grass is always greener.’ I tell S.
‘Not in Spain surely?’ She replies, with a twinkle in her eye.
‘Metaphorically speaking.’ I bat back, pleased she’s as sharp as she is - and still not pregnant.

‘Anything happening?’ Asks assistant manger T, breezing back from lunch.

Download the ebooks, in all formats, for more property tales. Links on the right.
Posted by secret agent at 8:44 PM