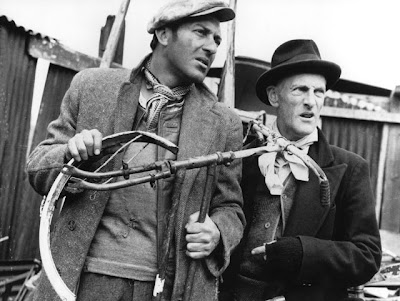 ‘Do we have to do this?’ I whine ungraciously to my wife.
‘Sometimes you have to get down and dirty.’ She replies pulling on the rubber gloves.
‘But I’d rather watch the football.’ I tell her, wondering if my back will be up to this.
‘Put it on record and you can come back to it when we’re done. You never know you might even enjoy it in a weird way.’
So I stoop down and lift the up and over door.

I must look at scores of homes a week and have seen thousands over my, less than glorious career, but rarely do I see a garage containing a car. Yes, you get the occasional motoring geek who concrete paints the floor and has the whole expanse clinically clean and organised like an operating theatre. The type of obsessive oddball who stencils the shape of his tools on the wall where they must be re-hung after use and who organises half-used paint pots in colour coded order, pastels on the left, bolder colours to the right, gloss and white spirit on a separate shelf. But most garages are like mine, full of rubbish yet to go to the tip.

‘I might need that wood one day.’ I tell my wife half-heartedly, as another sneeze erupts from the dust dancing before my eyes in the watery sunlight.
She looks at me scornfully. My DIY skills, or lack of them, are legendary in this household, there’s nowhere to hang rusting tools on any of the wall-space here. In fact, the only hooks I tried to mount on the block-work are now lopsided, with one rawlplug protruding from an oversized hole, as a crooked stepladder hangs at an improbable angle. I’ll fix that later.

The six foot – approx two metres, but buyers should take their own measurements as figures are for guidance purposes only – piece of skirting, is duly posted in the back of my company car, alongside the old pine shelving, several spent bike tyres, a brace of obsolete computers, the once top-of-the-range Sony VHS recorder and my eldest son’s redundant cathode ray television set. Numerous other black bags are wedged in the load space as the car sinks ever lower on its springs. I’m only making one journey.

‘What are these, can we ditch them?’ Asks my wife holding up several hard drives from the spent computer towers. I may not be that handy with a screwdriver but I laboured to remove the old spinning discs from the once expensive machines. You can’t be too careful with personal data and I don’t want some kid in an African village seeing my log on details, or the history I built up before I realised how to, browse in private.

‘Need to keep those, Data Protection Act.’ I tell her officiously. It seems to work. Years of selling have taught me if you say something with enough conviction people invariably believe you.
‘What are these doing here?’ Asks my wife tugging back some big sheets of cardboard I’ve been meaning to recycle for half a decade. I colour up as if she has actually found my Internet search records. Three separate for sale flags, belonging to three different estate agency companies, one of which has gone bust so its board and logo might be worth keeping as a collector’s item, are dustily revealed.

‘Isn’t that theft?’ Scolds my wife as I bounce up and down on the wooden poles and try to break them into manageable sizes. The polypropylene flags aren’t so easily destroyed, I know they burn well every November 5th but I’m already imagining the difficulty I’m going to have at the municipal dump. They charge for commercial waste and pleading one of the firms no longer exists, isn’t going to cut much ice with the officious waste control operatives.

‘They take down our boards all the time.’ I appeal in mitigation, as I try vainly to fold the fully waterproof, ideal for outdoor applications, fluted sheet advertising hoarding in on itself. Damn that stuff is robust. Not sure which dump bin it will go in, but I’m guessing a couple of millennium to decompose.

Reach your property goals with the 'Agents Diary' ebook on Amazon