Touch Me Feel Me - Monday 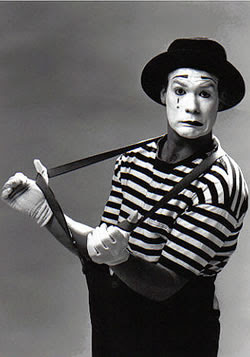 ‘Have you made your vendor contact calls?’ I ask my team irritably. I’m fed-up with looking out the window willing someone to come in yet half-hoping they won’t – particularly as 90% of the people we deal with are time-wasters. Not in their own eyes obviously, but in the final analysis, in the brutal spotlight of the sales figures and bean counter boss’s beloved balance sheet.

Vendor contact has always been an unloved job in the industry. You battle hard to win the owner’s instructions to sell their home, often caught up in the inflationary cycle of suggesting higher and higher asking prices just to please, just to shut out the other agents promising unlikely riches and a cheap commission structure, then nobody wants to view and the backtracking starts.

‘God I hate ringing some of these idiots.’ Carps assistant manager T, as my hackles rise. We’re nothing without good customer service skills and if the march of virtual estate agencies, DIY sites and bucket shop outfits with shady staff and suspect practices is going to be halted, it’s down to old-fashioned values – except where asking prices are concerned…

‘I’ve done most of mine.’ Says negotiator S, a hint of smugness in her voice. T scowls at her, so at least I can be sure he’s not shagging her – yet. I turn to look at imbecile trainee F. He looks nervous. That rabbit in the headlights look, with none of the benefits of being able to run him over without repercussions and a lot of paperwork.

‘Have you done yours yet?’ I ask F. I’ve only given him a shortened list to keep tabs on. Admittedly the owners are mostly the dreamers, over-optimistic and the out and out nutcases you only recognise once they’ve signed a three-month sole agency, but we all have to start somewhere.

F gives a less than convincing, slowly stuttering to a halt explanation as to why he’s not done what we, as a firm, promised to do from the outset. Keep in touch.
I can feel the anger and the ulcer burning, an inflammatory process not helped by the sight of B, our loose lettings lush, staggering in on unsuitable heels from what appears to have been a long, boozy – possibly x-rated – lunch. She has no problem keeping in touch with clients…

I let an expletive slip out. F visibly flinches while B totters to the kitchen. S and T just stare at their computer screens. There was a time when I never swore in front of my staff, but time, changed morals and dealing with property have loosened my inhibitions just as surely as they’ve loosened B’s bra straps.

‘We’ll all take a section of the register and we’ll be done by the end of the day.’ I eventually say, as I tap the relevant keys and the printer whirs in to life behind me. I could have done without the paper jam.

‘As long as I don’t have to ring that miserable cow.’ Argues T as he looks at his portion of the slightly crumpled sheet of A4 paper he has been allocated. Admittedly, I felt a bit guilty underlining the woman’s address in the colour-coded highlighter pen I decided to use for T’s portion of the list. Although I broadly subscribe to the mantra: Never ask a subordinate to do something you wouldn’t do yourself – there must be some perks in being the boss.
‘The sooner you call her the easier it will be.’ Says a voice I belatedly recognise as my own. The lady is a fully-wicker-bound basket case, aiming to spite her ex-husband by staying in the marital home for as long as she can. The man, living in a bed-sit somewhere, with his younger girlfriend – a lesson for middle-aged lotharios everywhere – is one of the few vendors wanting to sell at a realistic price. His spurned spouse wants mad money for the home and half his pension. Got to love the public.

‘How did it go?’ I ask the team when I emerge from my office after a prickly phone call with the bean counter.

‘Three taken off the market, one price increase and some new insults.’ Replies T sourly.