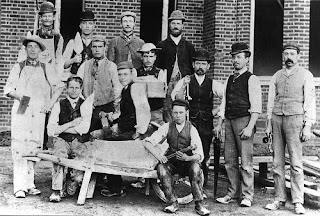 ‘Why are we stopping?’ Asks trainee F dozily.
‘Planning notice.’ I tell him, reversing at full speed into a space before someone else bags it. It’s resident’s only parking but I’m not intending to stay long, and we pay enough in business rates anyway.

‘Where is it then?’ Asks F as I grab my clipboard and make to get out.
‘ On the gate post,’ I tell him brusquely. ‘You’ve got to keep your eyes peeled for this sort of thing.’
‘I was watching the young mum with the pushchair.’ Giggles F, nodding towards a fast-departing woman who seems to have regained her figure effortlessly, judging by the tautness of her micro-skirt.

When I was F’s age the thought of lusting after any woman with children seemed mildly pervy, now judging by the youthful look of the disappearing yummy mummy I’d be happy to do her mother - or at least think about doing her.

‘Do you want me to come with you?’ Asks F, still distracted and no doubt mentally ravaging the unsuspecting pushchair woman before her stitches have healed. I worry about the boy, I really do.

‘No, stick with the car.’ I tell him, wincing as I exit awkwardly and my back grumbles along with my stomach. ‘And keep an eye out for traffic wardens.’ I toss him the car keys I’ve tugged from the ignition on autopilot. F is dozy enough to be still sat in the passenger seat as a carjacker drives off. Unlike the stolen motors with babies still strapped in the car seat appeals, I’m not sure I’d bother to ask for him back. Just take the insurance money.

You try and give them the benefit of your knowledge, I think to myself, as I approach the laminated planning notice wired to the rickety post. Try to get them to think laterally, to be alive to sales opportunities. But in F’s case he probably thinks proactive is a stomach-friendly yoghurt.

The house is on a corner plot with the sort of generous garden you wouldn’t get nowadays. I’ve spotted it before of course, but short of touting by knocking the door I haven’t been able to winkle out an opportunity to engage with the owner. Someone else has though.

Scanning the brief details and jotting down the local authority reference number, I realise I’m probably too late. An architect is listed on the application and no doubt a developer is already involved, probably with a conditional contract locking out third parties and tying the unsuspecting vendor to a one-sided agreement. Just in case, I hobble back to the car and grab my door handle. It’s locked.

‘Open up.’ I snarl angrily, tapping on the window until my knuckles ache. F is drumming his fingers on the dash and the deep booming of a base note throbs so loud the bonnet is vibrating. Finally, sitting bolt upright in the seat he sees me, eyes like a startled rabbit as he spots my demeanour. The fool reaches for the stereo, stills the techno-noise and then blips the remote. The car alarm goes off as I snatch open the door.

Stream of expletives later, car still rocking on its springs, I curtly instruct F to open the glove box. His hands seem to shake slightly, unless it’s some sort of bodily echo rippling though his frame, post decibel overdose.

‘Corporate leaflet.’ I say exasperated as he tentatively pulls out my meagre selection of compact discs. Eventually he hands me a wodge of pre-printed bullshit, claiming we are way better than we actually are. I remove a business card from my suit jacket top pocket, add it to the handout and wearily trudge back to the house in question.

‘Will they fall for that?’ Asks F softly when I ease myself back into the car, arse first, swivelling my legs by hand, like a ventriloquist’s dummy.
‘Probably not.’ I tell him wearily. ‘But you’ve got to speculate to accumulate.’
‘Like doing the lottery.’ Nods F knowingly.
‘No nothing like that.’ I say testily, spinning the key and hearing the starter motor clunk expensively.

Maybe the owner will call me – although I wouldn’t bet on it.