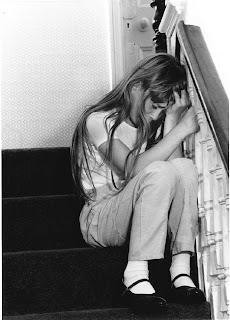 Out for a quick gulp of very fresh air at lunchtime. Have to battle my way through hoards of shoppers either scavenging like gulls on a tip, through the sale rails, or panic buying in the convenience store. It’s easy to fall out of love with humanity when you see them day-in, day-out, at their belligerent, avaricious, argumentative worst - but enough about my staff.

The pavements are still lethal of course and now there’s a rumour circling the offices that if you show a modicum of initiative and clear the ice-rink outside your own door that you could be sued if someone falls base over apex. And as if to confirm the world has lost its marbles, the bean counter boss generates a nonsensical electronic memo cautioning all staff members not to interfere with the weather-induced, natural pavement hazard scenario.

‘Have you seen what this arse has sent now?’ I ask when I check my e-mails and see the offending missive, on my return from shopping Armageddon.
‘He’s a tosser.’ Replies B from her lettings desk in a rare show of solidarity, just as assistant manger T squeezes through the door weighed down with half a dozen bags.
I scan the retail outlet names and shake my head and do the muttering thing I’m prone to, apparently. Half of the shops I couldn’t enter without my kids as a cover, and the other half I’m too parsimonious to patronise, even with a final 25% off all sale items.

I scan the diary and see, with a fleeting wave of surprise, that T has booked me a valuation late afternoon, presumably before he went on a credit card melting spree.
‘What’s the catch with the four-thirty?’ I ask T and as he’s still relatively inexperienced, he has the good grace to blush slightly.

All agents are targeted, it’s something you have to live with - or leave. T needs to secure new instructions just as I do, and although a debate rages in the industry as to whether individual or team targets are the most successful, he has a monitored objective to achieve. I smell a rat.

‘I’m double booked.’ Pleads T as B stifles a snigger of derision. ‘Ok,’ T admits knowing he’s been rumbled. ‘It’s a matrimonial,’ he gives an unconvincing smile. ‘And you’re best at handling those.’
‘Nobody is good at handling those.’ Growls a rueful voice, and I turn to see mortgage man M waddling from his office to the kitchen. He still hasn’t got over his wife shafting someone else before shafting him. I still haven’t got over the pair of them selling their house through another agent.

‘God I hate matrimonials.’ I say to myself as I hurry across the darkened park, late afternoon.
‘What’s that?’ Calls a voice from a nearby bench. Now I’m thinking out loud, it’s a slippery slope. Just like the path I’m on.
‘Nothing.’ I spit back in reply and press on before the bench-dweller pleads for Pilsner money. I negotiate the car park, to a background jangle of bottle bank deposits and distant tills ringing like a call to last Mass.

After an uncomfortable fifteen minutes of small talk on the woman’s sofa, a car’s headlights illuminate the room and minutes later there’s a rasping knock on the door.
‘Daddy!’ Calls the little girl who’s been perched on a familiar step on the stairs waiting expectantly. I’m pretty sure it’s not going to be a reconciliation if he no longer has his own key. A prediction confirmed by an atmosphere frostier than an Eskimo’s fridge that descends once the pair sit, with me in the middle like an impotent tennis umpire.

The girl clings to her father’s legs, limpet-like, and I’m reminded painfully of a similar child half a lifetime ago. The outcome will probably be the same.

‘No way.’ Exclaim the couple in what I suspect is a rare show of unity, when I suggest a sensible asking price. And for a moment hope flares in the little girl’s eyes, until the mother looks at her ex and snarls.
‘You’ll just have to stay in rented.’

The damage that we do.
Posted by secret agent at 10:05 PM